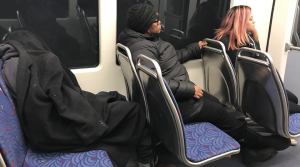 A more reflective post may follow, but for today I wanted to archive Monica Nilsson’s trip with St. Paul City Council Member Mitra Jalali Nelson and Hennepin County Commissioner Angela Conley on an overnight train ride through the Twin Cities, where many, if not most of their fellow transit riders were spending a homeless night in place that is warm. It may not be safe, it may not be comfortable, it may not be restful but on January 5 in Minnesota, warm is something.

Minnesota Public Radio (MPR) wrote about the trip. Mitra and Angela both posted impassioned videos about her time on the train. People are starting to listen.

Will you hear me? Originally posted by Monica Nilsson on Facebook

Some people say nighttime prayers before they go to bed. Some people pray before they go to sleep, bed if you’re lucky. Some wonder if anyone is listening. I’m grateful that St. Paul City Council Member Mitra Jalali Nelson, Hennepin County Commissioner-Elect Angela Conley and the Star Tribune’s Chris Serres were willing to spend time overnight on the trains to listen. Metro Transit Police estimate 300 people seek shelter each night as shelters in the region are full-with Metro Transit’s Homeless Assistance Team Sgt. Brooke Blakey.

Following so much attention after homeless encampments formed in St. Paul and Minneapolis last fall, people without shelter wonder if new encampments must form this spring in order to be seen and get help. An equal number of people were riding the trains as created an encampment along Hiawatha Avenue. They’re still seeking safety as they close their eyes on the trains. Hiawatha is sheltered. A regional response is necessary and I am grateful that Hennepin County Commissioner-Elect Angela Conley and St. Paul City Council Member Mitra Jalali Nelson, along with the Star Tribune’s Chris Serres, were willing to cross borders overnight, as people in need do, to see what most don’t.

Hennepin County’s most recent one night count of unsheltered people found 523 adults. Heading Home Minnesota’s 2018 one night count found 1066, a 40% increase from 2014. I hope other people with different kinds of power will follow Hennepin County Commissioner-Elect Angela Conley and St. Paul City Council Member Mitra Jalali Nelson along with the Star Tribune’s Chris Serres in standing in the midst of suffering as they did overnight. A sober invitation but I’m quite sure a transformative one. You can contact me at monicanilsson2016@gmail.com and I’ll walk with you.

Please see those who are without shelter, hear them or their advocates when you can’t see them and believe that they are out there, walk your feet to the center of the issue and help. We need you. This fall, the SAFE Group: Sheltering All Facing Endangerment and the Minnesota Coalition for the Homeless, proposed a $15 million dollar ask to our state legislature this year for Emergency Services Grant program funding. The budget has been $844,000 for the entire state for years. The good news is the Homes for All Coalition has adopted this proposal. Join us in the coming months as we advocate at not only the state level but the county and city levels to see that people have a safe place to close their eyes. Thank you to Hennepin County Commissioner-Elect Angela Conley, St. Paul City Council Member Mitra Jalali Nelson along with the Star Tribune’s Chris Serres for helping build public awareness one step at a time. 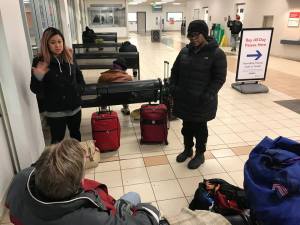 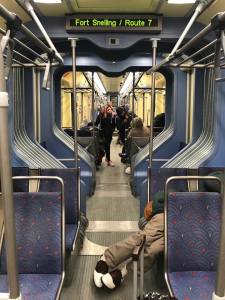 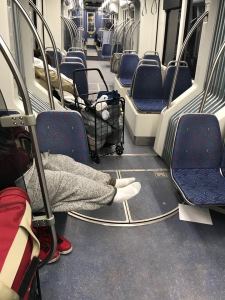 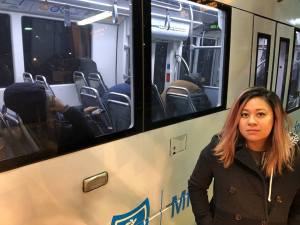 The following video contains photos from the Mall of America and the light rail overnight, along with my (Monica Nilsson’s) testimony at a late night Capitol hearing.

The Minnesota Legislature is considering refusing Medical Assistance to low income Minnesotans based on their employment status. Enrollees, most of whom are already working and make less than $16,642​ a ​year, would be required to work or volunteer 20 hours a week and report their activity. If this activity does not occur each month, or the new administrative system does not properly report it, the state would cut them from healthcare, causing a cascade of painful unintended consequences. Here is why I join hospitals and 100 other entities in opposing HF3722 and SF3611. It advanced in committee last week despite hours of testimony in opposition and will be heard again Wednesday, March 28th at 7pm in the House Health and Human Services Finance committee.

Homeless in Minnesota is a collection of stories, images and thoughts on what life is like on the street in and around Minneapolis and St Paul as documented by homeless advocate Monica Nilsson.

On Tuesday May 1, 2017, Monica rode the train in Minneapolis from 10:00pm to 7:30am to see what few of us see. She ventured out again on Tuesday May 30. Check out posts from her latest travels:

To learn more about life without shelter – please join us for a listening session on the lack of safe shelter on Wed, June 7, 4-5:30pm at St. Olaf Catholic Church in Minneapolis. 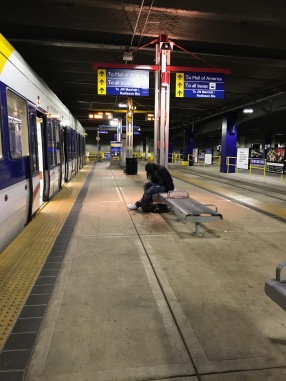 The sun will be coming soon and so will the commuters. Do these men from throughout the Twin Cities look prepared to go get a job today? and then there are those who slept in their car, a stairwell, a restaurant, the woods, a garage or stayed up all night and will now sleep in public, much to your dismay should your eyes glance in their direction.

Did you have adequate sleep last night? Will that contribute to how you function today? Without shelter and sleep, we are foolish to think people can have a productive day.

A listening session on the lack of safe shelter will be held Wed, June 7, 4-5:30pm at St. Olaf Catholic Church in Minneapolis. It will be live streamed on Facebook. Homeless folks will have the floor, to speak not sleep. If you are not homeless, please attend and just listen. #mnshelter

The Mall of America is not just the largest homeless camp in the Twin Cities; it now hosts Homeless Camp Snoopy. It’s 4am and the Transit Station has reopened. It closes every night from 2am-4am to rid itself of homeless people. They process to the trains and go back to sleep. Photojournalist David Joles and I counted 37 folks and one dog departing on the 2am train. That number is the size of a small shelter. For those who are fiscally conservative, the good news is we’re saving $500,000 a year for every 50 people we shelter each night on Metro Transit and at the Mall of America. You’ll have to calculate the cost to the homeless person.

Perhaps not surprisingly, there are more animal shelters than human shelters in the United States. Some may disagree but I think the blind man is as deserving of shelter as his dog.

A listening session on the lack of safe shelter will be held Wed, June 7, 4-5:30pm at St. Olaf Catholic Church in Minneapolis. It will be live streamed on Facebook. Homeless folks will have the floor, to speak not sleep. If you are not homeless, please attend and just listen. #mnshelter

We met in the Mall of America bathroom this morning, the only one I found unlocked in the past 10 hours of traveling from Minneapolis to St. Paul to Bloomington over and over on the Metro Transit light rail with people who sought shelter and were turned away after 120 shelter beds closed in Hennepin County because the colder months have passed. They also traveled from Dakota, Anoka and other counties who lack adequate shelter.

You learn not to drink water when you are without shelter. She’s new to being homeless. She asked if the Mall of America is open now. She’d like to see the pretty things. Have you seen Nickelodeon Universe when only maintenance and homeless people access it? It’s still pretty.

Can you see from my light rail photo who the homeless people are?

And so it begins, another day where those without shelter and those who just came from it start a new day, hoping to be surrounded by the pretty things: no panhandlers, no rough sleepers, no poverty. What would I like to see? What’s honorable not what’s pretty. Let’s stop reaching around the hard stuff and acting on the easy charity. We need to identify new shelter sites throughout the metro area and fund them, sheltering people until our infrastructure includes an adequate amount of housing for all. 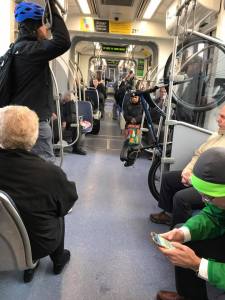 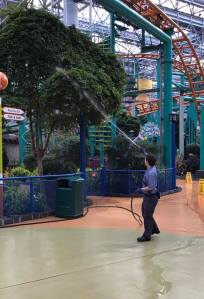 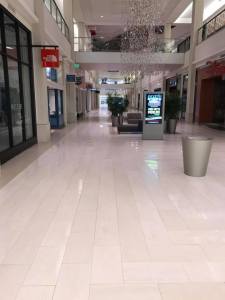 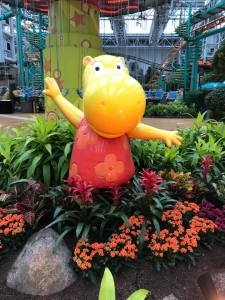 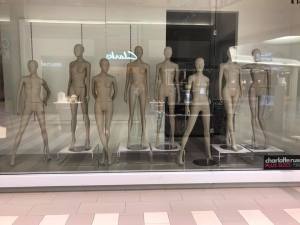 Like their brothers protecting and serving at another end of light rail lines, Bloomington Police, Mall of America Police and Metro Transit Police wake the slumbering sheltered at the MOA to ensure they are medically stable. Rested? No. Medically stable? At the moment. Good use of law enforcement funding? They don’t kick homeless folks out so the snoring returns as some of the 8000 Mall of America employees begin their work day. 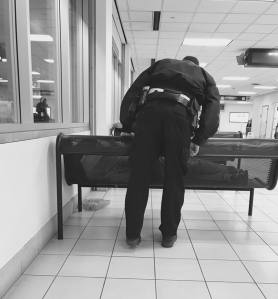 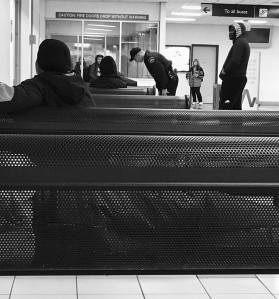 Homeless in Minnesota
Blog at WordPress.com.